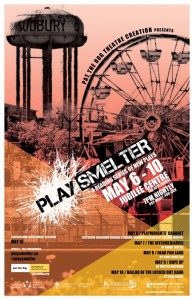 PlaySmelter 2014 full releaseMatthew Heiti, Playwright-in-Residence at the Sudbury Theatre Centre and the man behind the very successful Playwright’s Junction, forwarded the following:

Sudbury, ON – From May 6– 10, four new plays will be given their first readings in front of a live audience as part of PlaySmelter, at the Jubilee Centre. Governor General’s Award-winning playwright Colleen Murphy will join local writers Karen Thistle, Jenny Hazelton, Jesse Brady and North Bay native Kristin Shepherd in this initiative, produced by Pat the Dog Theatre Creation. The series, now in its second year, offers the rare opportunity for an audience to get their hands dirty by participating in the development of these important works-in-progress. All readings feature performances by local actors, and will be followed by lively discussions, accompanied by delicious offerings from new Sudbury vegetarian/vegan hotspot, The HeartBeet Café.

Wednesday, May 7th – The Intermediaries by Karen Thistle. A young woman, facing the pressures of high school and growing pains, is entrusted with the care of the magical beings that inhabit Bell Park.

Thursday, May 8th – Dead Pan Land by Jenny Hazelton. Two people are drawn magnetically together. A riveting piece of physical theatre about the adventure of breaking free from the mundane day-to-day routine.

Friday, May 9th – Hope Op by Kristin Shepherd. A hilarious and poignant look at ageing. In their daily yoga class, four women plan a hostile takeover of a supermarket.

Saturday, May 10th – The Ballad of the Locked Out Gang by Jesse Brady. Mired in a long and bitter strike, a group of miners plot a daring gold heist.

All readings begin at 7:00pm at the Jubilee Centre (195 Applegrove). Admission to each evening is Pay-What-You-Can (suggested minimum $10).

The Festival will also feature Development Sessions for budding writers. During the afternoon of May 10th, from 2pm-6pm, instructor-led discussions will be offered on a variety of theatre creation hot-topics. Space in these intensives is limited, so please contact Matthew Heiti, at matthew@patthedog.org for more information.

In just its second year, PlaySmelter is a grassroots festival that is getting attention from outside the city. In addition to the funders from the pilot year (including Ontario Trillium Foundation) who remain committed Pat the Dog can boast new and increased funding from Canada Council ($15,000), OAC Northern Arts ($12,500), Access Copyright Foundation ($7500). Supported by local partnerships with The Days Inn, The HeartBeet Café and STC, the Festival is quickly growing. “We are thrilled that these are both provincial and national funders,” says Pat the Dog’s Artistic Director Lisa O’Connell. “It is proof of the value of local art being created here in Sudbury.”

All dollars raised for PlaySmelter stay in Sudbury. This year, the Festival will hire more than 30 local Arts and Culture workers over the course of a month, and all are compensated based on professional union rates. Many of the writers have gained experience through the Playwrights’ Junction workshop at the Sudbury Theatre Centre. Several of the writers featured at PlaySmelter have gone on to be professionally workshopped, and one of last year’s scripts, Blind Nickel Pig, by Lara Bradley, will received its premiere professional production by Sudbury’s Encore Theatre Company.

Pat the Dog Theatre Creation www.patthedog.org is dedicated to the support and advocacy of playwrights and their plays, and is the only playwright development centre in Ontario open to both established and emerging artists. Pat the Dog has more than 300 members across Ontario and is a member of the Playwrights Guild of Canada, the Literary Managers and Dramaturgs of the Americas and the Professional Association of Canadian Theatres. For the past two years, PTD has been working to develop and promote Sudbury playwrights.

Moving with Poetry News
Welcome to 2017 and Our 25th Year News
Chuck Wendig Workshop – May 10th – Toronto Other Writing Events
Welcome to the Fall 2016 Season of the SWG News
Congrats to the Winners of Creepy Capreol Jr. Writing Contest News